Each December of recent past years, I’ve been fortunate enough to travel to some amazing destinations.

Each December of recent past years, I’ve been fortunate enough to travel to some amazing destinations, this December there was really one destination that I’d had on my mind to visit for a while; Budapest. It’s a perfect destination for this time of the year, with the Christmas markets, the scent of mulled wine and chimney cakes in the air of almost every street, and we were lucky enough to have snow whilst we were there.

We arrived late afternoon and already it was colder than back home in England, we found our hotel apartments which was located just a few minutes walk from the river Danube. After dropping our bags and warming somewhat in our room we headed out to explore the Christmas markets and find somewhere to eat. Hard Rock Cafe has become a staple visit when traveling to cities abroad so this was the first restaurant we visited on our trip. It didn’t have as nice decor as some of the others we’ve visited, but there was still a decent selection of band memorabilia to browse and the service and food were as great as we’ve previously experienced. Two sets of Christmas markets we visited were at Vorosmarty Square and by St Stephen’s Basilica, the latter being a short walk from the apartment. Heading down a street of Christmas stalls brewing mulled wine and warming fresh chimney cakes, the street lead to an entire Square of stalls in front of the amazing building of Basilica, a clear centre piece decorated with lights and a tree, we moved through the crowds exploring the novelty gifts and traditional street foods the markets had to offer. Undoubtably this was the time of the year to visit Budapest.

When waking up the next morning, delighted by it snowing outside and a light covering of snow, we had our main stop on the trip ahead of us; Széchenyi Baths. Did I mention breakfast yet though? We found this adorable donut and bagel shop about a street down from our apartment. We actually ate their twice over the weekend because we weren’t disappointed the first time at all. They were amazingly decorated and tasted great too, and the white hot chocolate’s were the best thing I had all weekend. With the donut shop situated so close to our hotel apartment, there was also a great pizza place near too which we also checked out later in the day for lunch, both were also amazingly priced for the quality of the food. 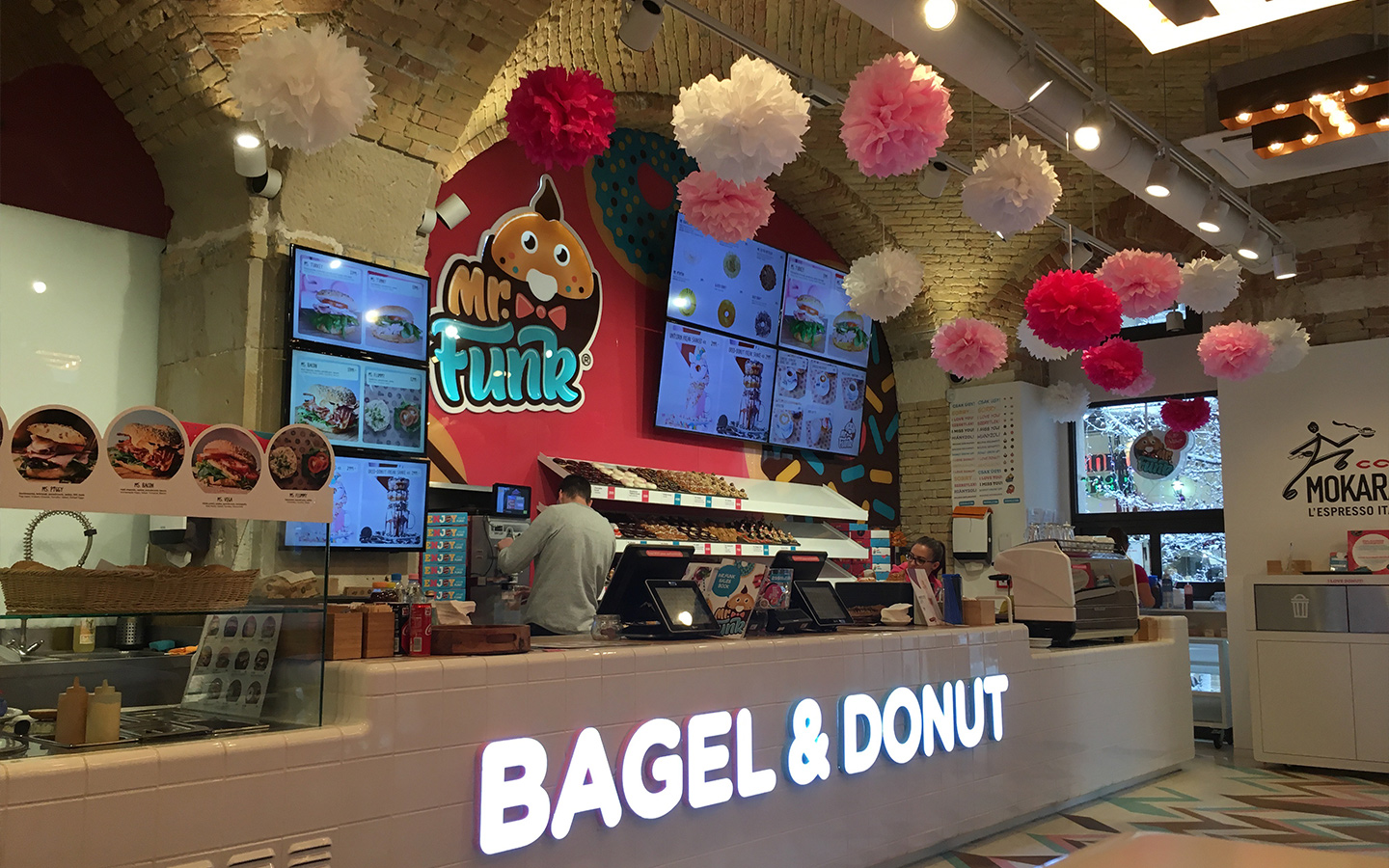 Getting back on track with our day, we took the Metro and headed over to the Széchenyi Baths. As the largest medicinal bath in Europe, it didn’t disappoint. Still snowing, it made a pleasant contrast to the heat of baths. It was an amazing experience and came in at around 20€ per person which honestly felt like good value for an experience we can’t get back home.
Later in the day, we walked down to the Danube to book an evening river boat tour which I’d been recommended prior to the trip. We had a little bit of time to spare still, so we walked around some of the surrounding area including the building of parliament which is phenomenal to look at from both up close and on the river. As one of the most popular tourist attractions, it was worthwhile, but also quite noisy on the boat, which made it difficult to actually hear anything that was being said about the history of the architecture of Budapest that we watched pass us by peacefully lit up in the darkness of the evening. 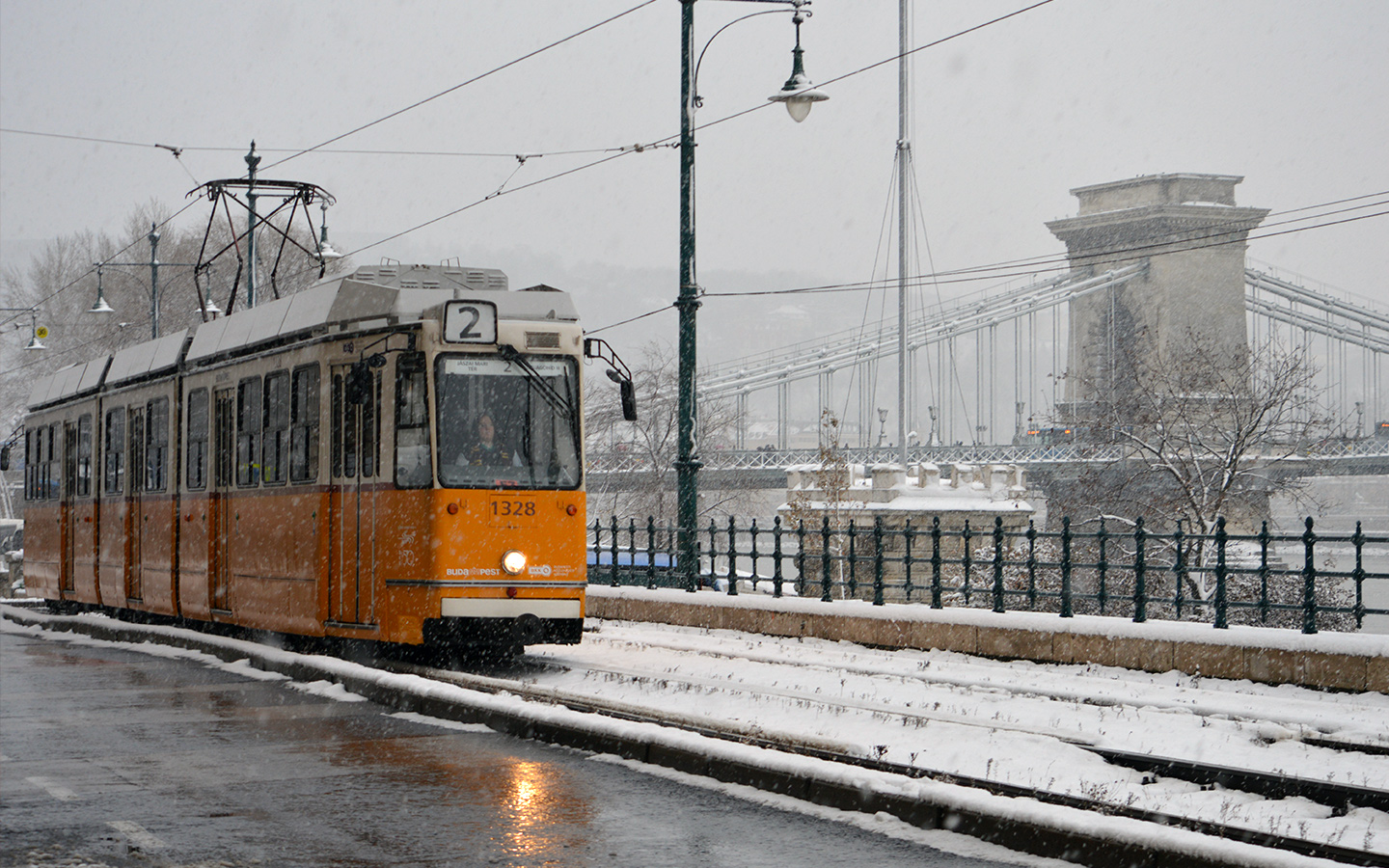 On our final day in the city, we ventured over to Buda, which I would say has some of the best and most picturesque views of the city. We’d packed a lot into this day, but due to our hotel being so close to the edge of the river, even though we traveled everywhere by foot it was completely manageable. During our way up to Fisherman’s Bastion we had a few stops to make at perhaps slightly less visited attractions - or so it felt due to how quiet both were. I’d noticed a leaflet in our hotel apartment advertising a Houdini museum which was nearby to Buda Castle. Instantly I was excited, as I’m one of those who finds even the smallest of magic tricks super exciting. It’s a small museum which exhibits both authentic Houdini memorabilia alongside some replicas that were created for the 2014 film. All in, it probably only takes around an hour to fully see the museum, which is a guided tour followed by a short but entertaining magic show to end the visit on. After this, we ventured over to the Labyrinth of Buda Castle, which is just across the road from the House of Houdini. Another really cool experience that’s slightly off the beaten track of most tourists it seems, the labyrinth didn’t seem busy but it’s worth a stop. It felt like there was a few routes to take around the labyrinth but some often with dead ends. The highlight of the labyrinth was a section where visitors are told to put their phones away and not use them for light sources as in this section, it’s completely pitch darkness, like true darkness. We did have a group who seemed to ignore that rule and get their phone lights out to guide their way, which would have ruined the experience, but luckily for us, someone else complained for them to turn their lights off. Gripping on to each other and holding our arms out to follow to walls, we eventually found our way out into the light.

Fisherman's Bastion, likely one of Budapest's busier and more well known sights to visit. The pavements were frosted with a coating of snow, and the closer to Fisherman’s Bastion we approached, the snow became ice and so walking became sliding. Overlooking spectacular panoramic views of the city and the river Danube, fairytale looking turrets and Matthias Church just in front, Fisherman’s Bastion was easily the place in Budapest that wowed me the most, it’s truly unique to the other destinations I’ve traveled to in Europe so far. The nearby Starbuck’s was heaving with tourists, but a welcome sight, I couldn’t have appreciated that hot maple latte more. 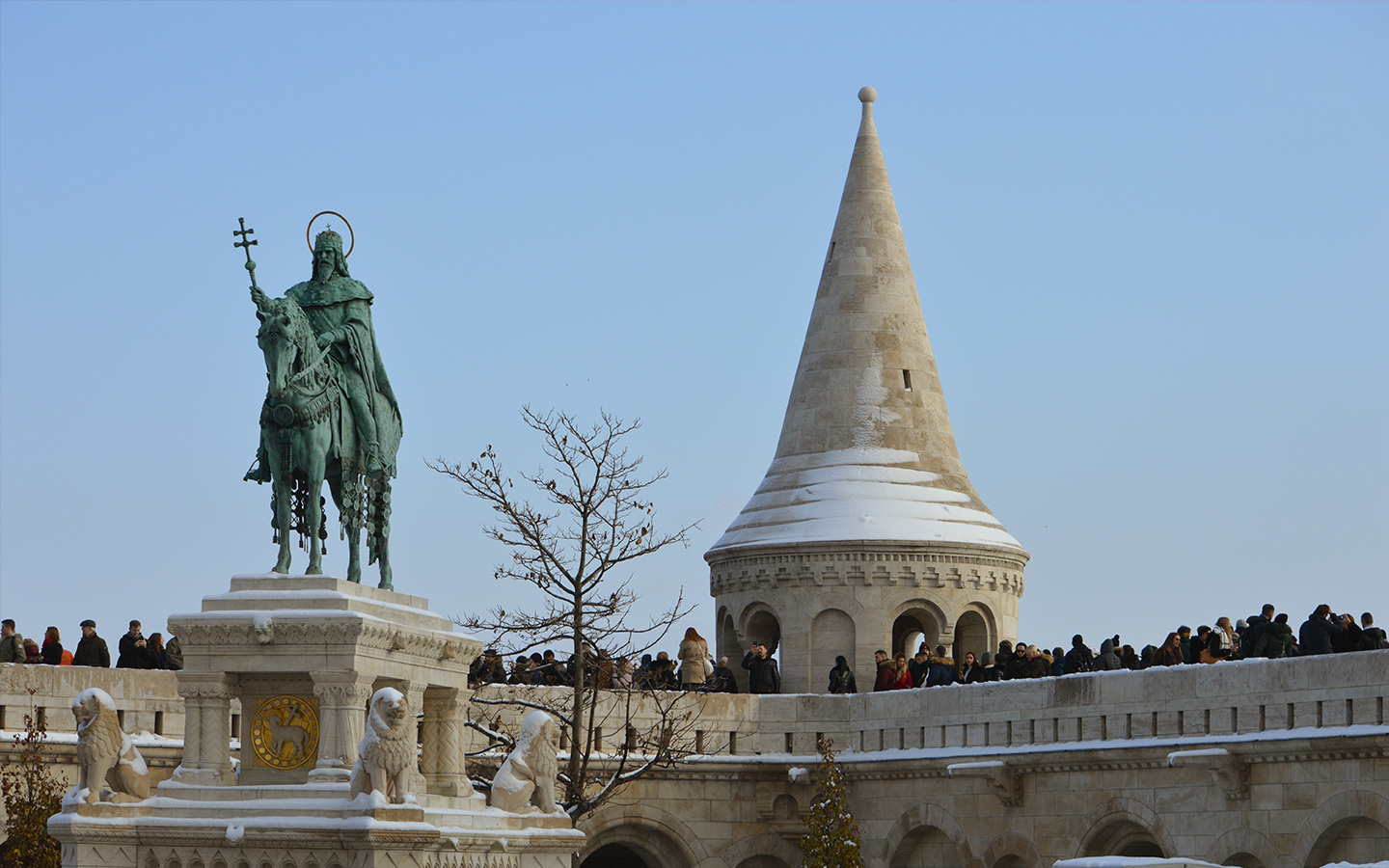 Heading back we found a more traditionally Hungarian restaurant to eat at, as to this point we’d hadn’t really experienced any Hungarian cuisine, other than the cinnamon chimney cakes from the Christmas markets. I’m defiantly a bit of a picky eater, and I wasn’t too sure I’d like the more typical Hungarian dishes that you’re suppose to try when you visit. The restaurant itself was exactly what we’d been looking for, something that looked and felt traditional and true to culture. Though I ordered a pasta dish, to be on the safe side, Ryan had ordered Hungarian goulash and some kind of dish that had chicken and dumplings which I did try a little of. This was the last stop on our trip before exploring the shops in the city a little longer before making our way back to the airport. Looking down from the plane and over the wing. I knew I’d always have fond memories of Budapest. 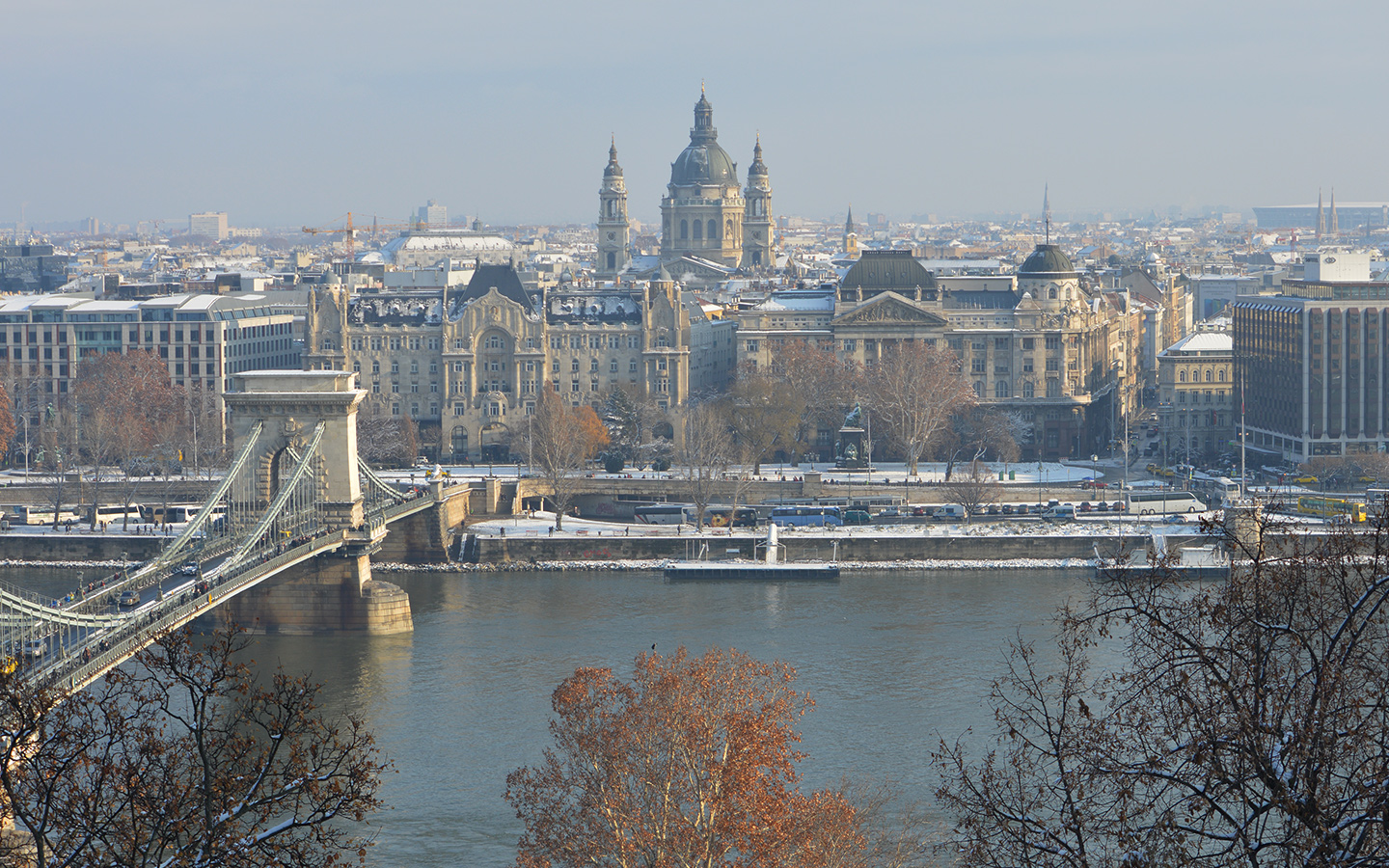